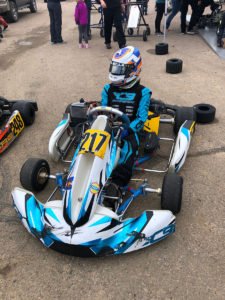 With the fourth round of the Colorado Karting Tour taking place at the IMI Motorsports Complex, Christian Bird Motorsports drivers walked away with two wins, five podiums and multiple fast lap honors. With a month off until their next event, the growing program will continue to offer test opportunities in the state of Colorado for interested drivers.

“It was another good event for us at IMI Motorsports,” explained Christian Bird. “As a team, we are firing on all cylinders and making it tough for our competition. A couple of minor issues held us back from even greater results, but we now have more goals to shoot for in round five.”

Leading the way for the team was Liam Letzsch who dominated the Rotax Junior category. The young gun garnered another weekend sweep including pole position, heat race wins and main event victory. Dominating the junior field, Letzsch took control of the championship points lead after only four event weekends.

Christian Bird Motorsports second win of the weekend came from Elijah Khrestsov. Taking the main event victory and fastest lap of the race, the young driver has his sights set on the title. Pulling double duty and competing in the Junior 1 class, Khrestsov added a sixth place result in the 4-cycle division.

Hayden Moody and Gage Korn added second place podium finishes at IMI. Moody secured the second step of the podium in KA100 Senior while Korn made it a 1-2 finish for Christian Bird Motorsports in Micro Max following Khrestsov across the line. Competing in both two and four-cycle powered classes, Moody was classified in the twelfth position in LO206 Light while Korn secured a fifth place result and the fastest lap of the race in Junior 1 Cadet.

Timmy Trostel added another podium result in Colorado taking the third position in Junior 2 while Dave Williams added a pair of fifth place finishes in Rotax Junior and Junior 2. Trostel was the victim of an unfortunate penalty in Rotax Junior forcing him to retire. Deanna Hoffman had a Rotax race to forget after a post race infraction took her to the bottom of the results sheet, but she rebounded to claim the fastest lap in Junior 2 en route to a solid sixth place result.

With Colton Timmons set to do battle in the Stock Honda Shifter class, a nasty virus forced him to the sidelines for the weekend. Look for Colton to return to the Christian Bird Motorsports stable for round five in a few weeks’ time.

Bird continued, “We are building a solid foundation for our program on the regional level and look forward to continued success. Currently we are working towards bringing some of our drivers to the Superkarts! USA SuperNationals in Las Vegas in November so interested parties are asked to contact us.”

The next event on the Christian Bird Motorsports schedule is the upcoming fifth round of the Colorado Karting Tour on July 28th at IMI Motorsports in Dacono, Colorado.